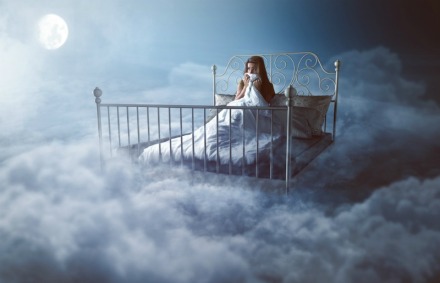 I know what you’re thinking.  This is a blog post about our reality being a dream 😊.  Well…yes, of course!  No, not really, but sometimes I wonder about the nature of our reality / consciousness etc…Here though I am just looking at one particular instance / experience in my life that for some reason I could never forget.  Something from my very early childhood and virtually one of my earliest memories.

I never met my biological father.  My mom met / dated him in college, he got her pregnant, and left her.  She was on track to becoming a schoolteacher but dropped out for a while to have me and spend time for my first couple of years before she went back to college.  She brought me with her to Ashland College (now Ashland University) in Ohio for her last year or so.  We lived in a duplex house (of sorts), but we had to share the bathroom with the people living on the other side of the house.  Weird, but I guess when you’re a financially struggling college student you must make do.

We slept on a pull-out couch bed in the living room and one night something woke me up.  I sat up and there was a monstrous looking man standing at the end of the bed and holding what looked like a cinder block over his head.  He was angry.  He wanted to crush me with the block but for some reason he couldn’t and that was making him even more angry.  Before I could say or do anything, there was a comforting voice, “Lay back down…”. My mom was just laying there sleeping undisturbed.  I felt safe.  Not scared at all.  I laid back down and went back to sleep…

My entire life up until circa post-Shift 2013, I had always attributed this “memory” as a dream I had as a child.  What a vivid dream to keep with me all these years.  It wasn’t until 2013 that it hit me.  It was never a dream.  I saw “something”, some manifested apparition, or whatever.  My grandmother had told me a story about a significant event that happened back in that college time with just me and my mom but for some reason I never really made any correlations between the “dream” I had and this particular event.  So, it wasn’t until many many years later, and years after my mom had passed as well back in 2005 that I had a conversation with my great aunt about it.  Because she was there…

Every now and then my grandma and her youngest sister (by 20yrs!) would make the 3hr drive to Ashland to visit my mom and I.  One Saturday morning, as my aunt recalls, my grandma wakes up with this “feeling” that she needed to come visit us.  A bit impromptu for sure as my aunt and her always made plans well in advance.  She called my aunt and asked her if she wouldn’t mind going on a trip to see Jeannie and Ben (this is in 1973 and we didn’t have a phone in our duplex for grandma to call us).  Of course she would, as she had no plans that day.

They arrived a little while later in the morning and saw my mom’s little yellow Vega out front.  Knocked on the door, no answer.  Pounded on the door and nothing.  My aunt walked across the front porch and put her eyes to the glass to look inside and saw me and my mom sleeping on the pull-out couch and shortly after that she smelled it.  Gas.  They broke the front window to rescue us.  I don’t remember any of that.  Zilch.  Seems like such an impactful event that I would have to remember it, right? (or I was really “out of it” from the gas…) Anyway…there was literally a fire department right across the street from our duplex and my aunt ran over there for help.  We had a kitten.  She didn’t make it.  Strange but I do remember my mom and I burying her in the backyard.  It was the gas stove that was the culprit.  Hose came out or cracked…?

After the Shift in 2013, I began seeing and experiencing the world much differently.  That time in my life came back to me and finally made sense.  A negative spirit or entity wanted to end my life and found a way to do so, however, a protective entity (angel?) was there to watch over me and even…send Help.

Now the notion of spirits and angelic beings is not for everyone.  Got it.  For me, and from my Perspective since 2013, it is a part of my Reality.